Invented in 1912 Turkish Taffy is not Turkish or a taffy. So what is it? Turkish Taffy is a nougat that consists of corn syrup and egg whites. It was originally sold in Woolworth’s stores and became popular as it had to be broken into pieces with a ball-peen hammer. After WWII it was released in a candy bar size. You can still enjoy cracking this candy bar by putting it in the freezer and smacking it on the counter.

Your cart is currently empty!

Receive exclusive offers and discounts by joining our email list.

in Pottstown, PA by 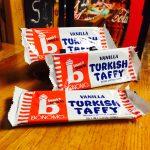